Thoughts on Time, Submarines and OggCamp

I’m at John Lennon International airport, having a coffee and looking over at a big yellow submarine. 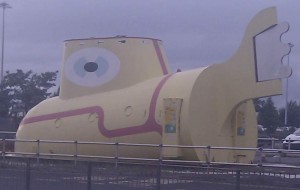 I walked past that submarine looking for a bus to take me to OggCamp12. The first stop was the “wave bar”, where the universe of bus tours merged with that of OggCamp.

OggCamp. The gathering of enthusiasts who had answered the call and converged to bring the message of free culture, open source, hardware hacking, and the commons to the inviting arms of Liverpool. That and helping wheel chair bound pensioners navigate the seemingly endless supply of steps that made up the bar.

The following morning we made the short walk way up the hill to the venue at Liverpool John Moores University. It was hot which was a shock and the third dimension was also a bit of a shock after 10 years in the flatlands of Holland.

The building Dan had scored was a m a z i n g !

The crew Les had assembled were a m a z i n g !

So efficient was the crew that everyone was setup and ready to rock with the efficiency that would make even the most professional rail way scheduler do some serious soul searching.

Then the last prize was given away and everyone cheered to thank Dan for all the hard work and bam !!!

And then it hit me, time our old friend was playing tricks again. The old “one minute you’re holding them in your arms and the next minute they’re out the door” trick that parents the world over are familiar with.

I took a deep breath and dismantled the booth, had my photo taken and made my way back to the Hotel to start the job of editing. As I listened to the recordings, the whole event started playing back to me. My tour of the exhibition area, the banter at the HPR booth, the chance meetings in the halls, the enthusiasm of the hardware hacking area, the live session with 20Lb Sound, the morning after, the carrot cake, the outside interviews and then the raffle.

I hadn’t missed it. I was there. I was part of it. And thanks to the good people at Leaf, we had a chance to relax, catchup and say goodbye to at least some of the friends we had met old and new.

Learning from the mistakes of last year, all the 36 interviews will be posted and released this week on Hacker Public Radio for my enjoyment and I hope for yours. So I’d like to thank everyone that put on the show, that participated in it and that made me feel at home. A special thanks to Paul for suffering me been so stressed and to Manon and the toots for suffering me in general.

So now time slows down again and twelve months is a long time to wait for the next OggCamp.

That said it’s only six months until FossDem.

I’d need someone to help me out though.

Hmmmm something to think about.

Still an hour to wait.

I can’t shake the idea that that submarine may have served a previous role in the water purification industry.

4 Responses to Thoughts on Time, Submarines and OggCamp