HPR: Shot of Hack – Changing the time offset of a series of photos.

The problem: You have a series of photos where the time is offset from the correct time but is still correct in relation to each other.

Here are a few of the times that I’ve needed to do this:

You can do edit the timestamp using a GUI and many photo manipulation applications like the GIMP support metadata editing. 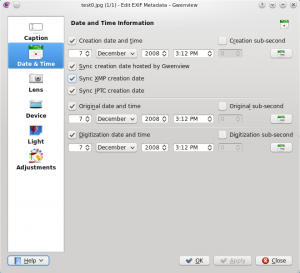 The problem is that this gets tiresome after a few images, and anyway the times are correct in relation to each other – I just need to add or subtract a time correction to them en masse.

The answer: exiv2 – Image metadata manipulation tool. It is a program to read and write Exif, IPTC and XMP image metadata and image comments.

The trick is to pick a image where you can that figure out what the time was and work out the time offset. In my case I needed to adjust the date forward by six months and four days while changing the time back by seven hours. I used the command exiv2 -O 6 -D 4 -a -7 *.jpg

When we run this we can see that the timestamp has now changed.

That’s it. Remember this is the end of the conversation – to give feedback you can either record a show for the HPR network and email it to admin@hackerpublicradio.org or write it on a post-it note and attach it to the windscreen of Dave Yates’s car as he’s recording his next show.

This entry was posted in Podcasts and tagged Hacker Public Radio, hpr, multimedia. Bookmark the permalink.

1 Response to HPR: Shot of Hack – Changing the time offset of a series of photos.